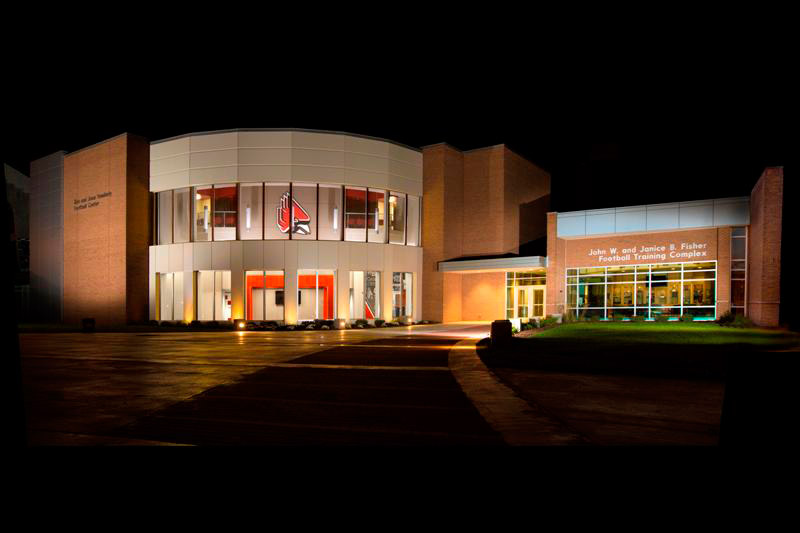 College sports is big business. In every athletic conference in the country, colleges and universities are vying for the best, most talented players available. Recruiting is extremely competitive with many factors for the players to consider. During the recruiting process, all aspects of a program are taken into consideration. Facilities are a huge part of the decision.

With the onset of new sports networks (e.g. The Big Ten Network), income from distributions of profit are divided among component members to operate and improve their respective programs. This is happening in all types of collegiate sports, and the income they receive often gets allocated for new and improved sports facilities. Enhanced facilities lead to better recruiting, which leads to a more successful program. 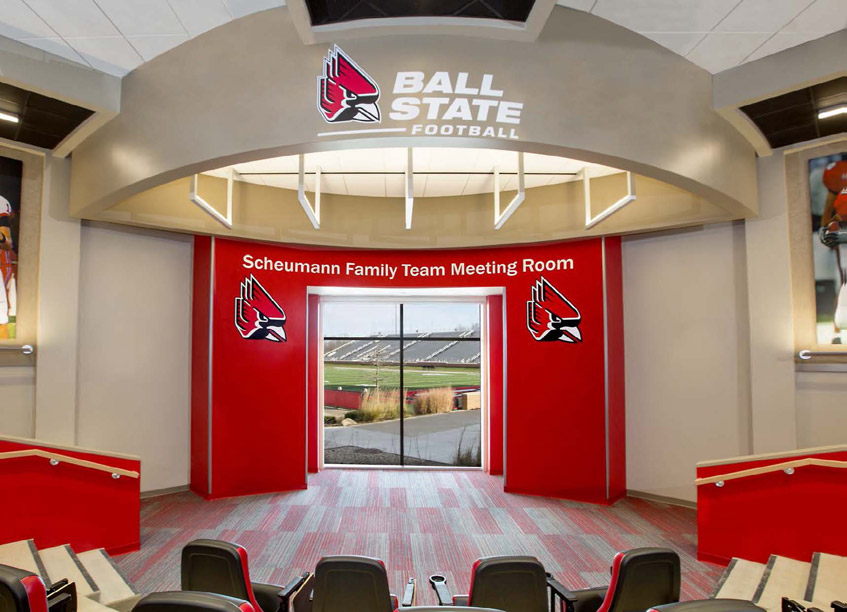 For the new Ball State University Football Complex, the design focused on overall recruitment. As the saying goes, “You only have one chance to make a first impression.” The face of the facility had to make that good first impression and reflect the seriousness and commitment of the institution to its program.

Initially, the building was to be located on the southeast side of the existing Scheumann Stadium, basically at the back door of the football training center complex. The existing program was utilizing an outdated facility originally designed for training, for team meetings and coaches’ offices. After completing a site study and evaluation of the pros and cons of both the east and west sites, it was Brenner Design’s recommendation to place the new structure at the western location. This put the new complex at the forefront of the stadium proper, in direct view of the Ball State University Alumni Center. An exterior plaza was also planned at the entry, to be used as a drop-off point and gathering place for pep rallies. 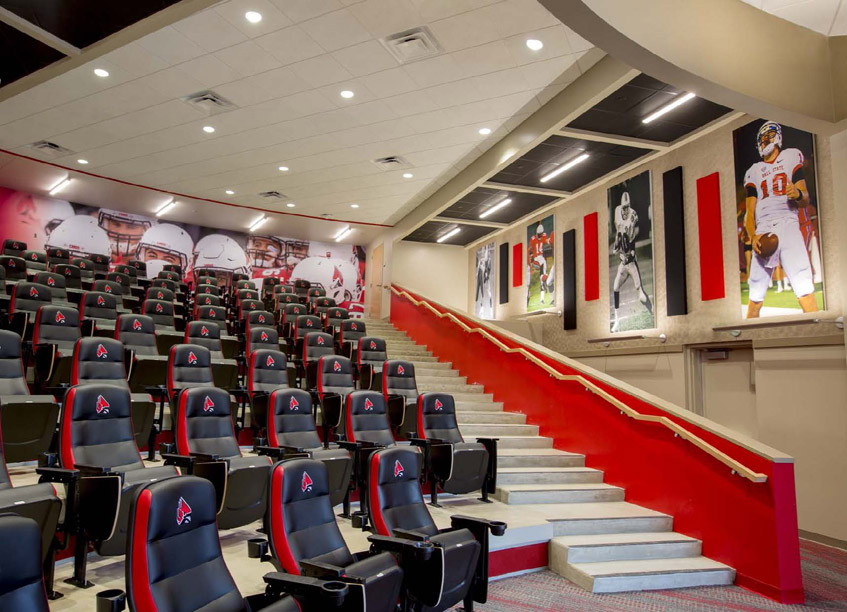 From the start, the goal of the building was to create a “wow!” factor to catch the attention of potential recruits. The architectural façade needed to be eye-catching; the interior of the building needed to be equally impressive. The exterior façade was designed to mimic the existing colonnade of the stadium, giving the structure a feel of competitive athletics. The new structure also needed to compliment the entry façade of the existing training center. The view from the plaza into the upper level was planned to include an oversized electronic mesh video screen that could highlight the history and successes of the team, and offer the opportunity to show live action from within the stadium.

The building encases an impressive meeting room that accommodates the entire team, staff and coaches. Large-scale graphics and images of past players double as sound masking around the perimeter of the room. The room’s front stage focuses on the head coach, with a projection screen that can be raised to expose a view of the playing field. The team can access the field directly from the bottom level of the room. 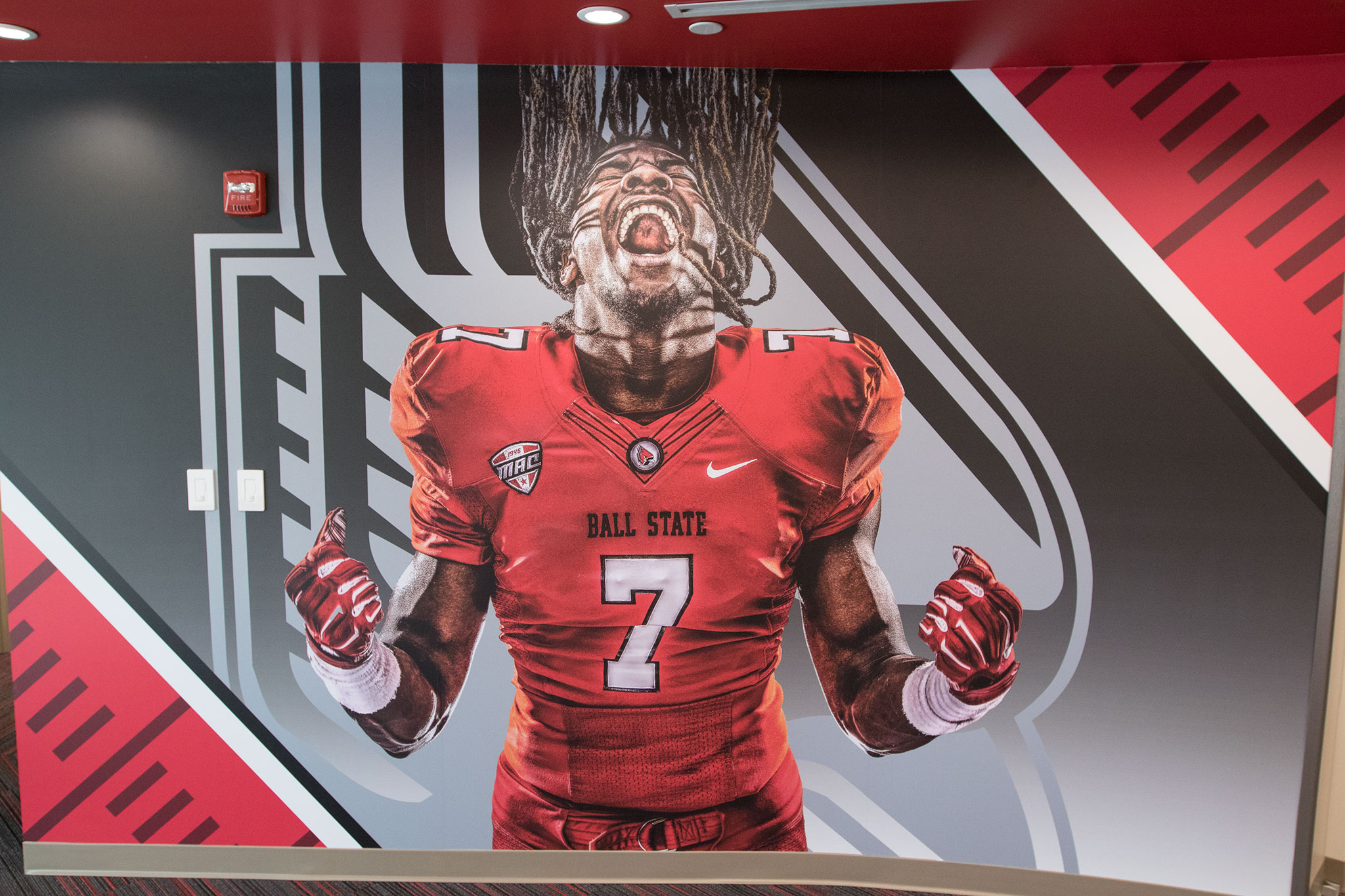 The upper level acts a reception area that starts the journey through the recruitment dance. The area acts to showcase past accomplishments of the team, and to tell player success stories as well as displaying current uniforms and the upcoming team schedule. The recruits are escorted through the facility to meet with managers, staff and eventually the head coach in a presentation conference room. The head coach’s office has a corner view to the entire football field. It can also be used to recruit other coaching staff and entertain influential alumni.

The resulting design enhances the existing football program both functionally and aesthetically. The University and coaching staff love the final design. The impact to recruiting and the overall program will be evident over the next few seasons.* In fact, BSU’s 2017 27-member recruiting class was recently ranked second best in the Mid-American Conference (source 247sports.com). Coincidence? We can’t be sure…

*The BSU Football Complex received an award for outstanding design of an unbuilt project by American School & University magazine. It has been submitted as a built project with the results to be announced later in 2017.