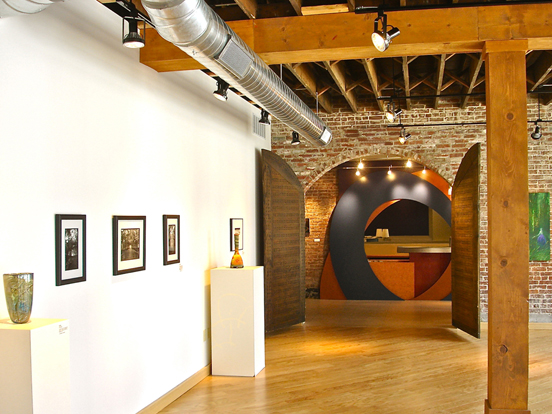 The Arts Council of Indianapolis fosters meaningful engagement in the arts by nurturing a culture where artists and arts organizations thrive. In designing a new location for the Arts Council at 924 North Pennsylvania Avenue, Brenner Design considered not only the interior environment, but also the external image that their facility would project to the City of Indianapolis.

Located in the historic Metzger Building, the arts organization had three prime goals: to showcase works of local artists, to create a home for the administrative office staff, and to be a catalyst for improvement in the St. Joseph neighborhood. 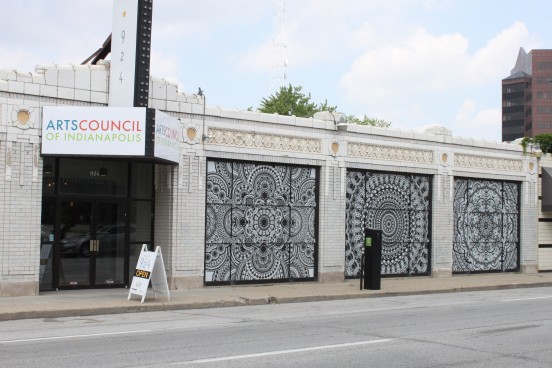 The proposed plan layout included a storefront gallery (Gallery 924), a central visitor entrance lobby and administrative offices. Brenner Design proposed using perforated vinyl on the office windows to allow views outward from the interior, yet shield the staff from passersby. (The vinyl is the type used to envelop city buses.) Their “big idea” was to use the vinyl to reproduce works of art as large-scale murals. 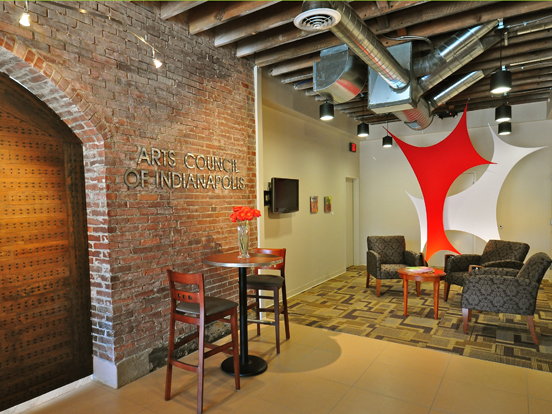 The sustainable design concept for the interior reused original brick walls, historic wood doors, wood columns and beamed ceilings to create a flexible envelope for the gallery. The office space was created by juxtaposition of curved walls accented by the bright colors and original works of art placed throughout the space. The view into the gallery at night is quite inviting and attractive. The overall project was awarded for excellence in design.

Several artists have benefitted from the commissions as well as the recognition. The Arts Council puts out a call to artists for existing work through their Artist Opportunities e-newsletter. Out of a pool of around 20, one is selected and the murals are fabricated and installed. In 2016, 40 works were submitted. There have been four different artists selected for installations since 2010 including Rachel Steely, Wug Laku, Susan Hodgin and Jessica Springman. 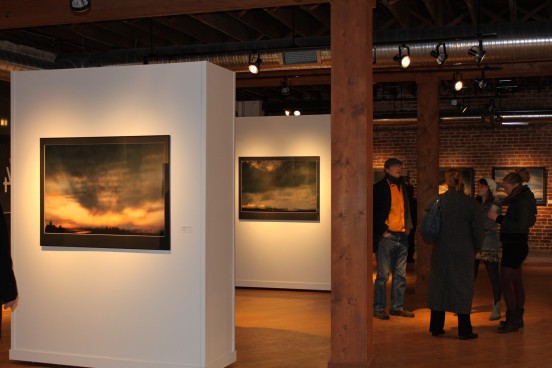 “I was thrilled when I found out I’d been selected to receive one of the Arts Council’s Window Mural commissions.  What an opportunity, to have my work viewed daily by hundreds of people for an entire year, 24/7 and get paid? And just as importantly for me, to be able to see my work on that scale.” – Wug Laku, 2011 Mud and Twigs, Branch Weaver and Stilled Stream

“The murals have been great for my professional art career in Central Indiana. Anyone who has been to Gallery 924 over the past two years has seen my art on the building. The murals make it easy to introduce myself as an artist.  …often the first question asked is ‘Where is your work displayed?’ and I can say ‘You know Gallery 924 over on Pennsylvania Street? Those are mine!’” – Jessica M. Springman 2014-2016 Revelation, Pristina, Singularity 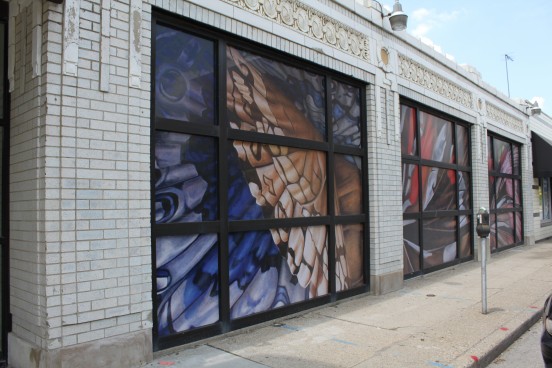 The full-height murals have impacted the neighborhood with unintended results. “The murals are a success on so many levels; talented local artists are acknowledged, compensated and utilized in a unique way on a grand scale. The Arts Council becomes a more visible entity in the city as well as in our immediate neighborhood,” said Lindsey Lord, Public Art and Artists Service Coordinator. Notably, the murals have become a backdrop for selfies, senior photos, engagement photos, even professionally-produced commercials. “It’s a quite interesting study in human behavior from our side of the windows…you’d think people would realize we can see through the vinyl,” says Lindsey.

“People who see the work in photographs, as well as on the street, are generally impressed by the scale of the work. They also appreciate that the images ‘go with’ the architecture of the building (‘as though it was planned’).” -Jessica Springman

That’s what happens when art + architecture work together!