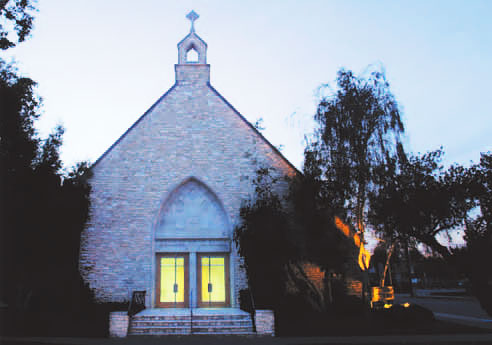 The cupping of hands in prayer—a simple gesture, an expression of faith, and a metaphor of form—was the inspiration for the physical changes to the First Presbyterian Church of Encino. Pastor J. Malcolm Laing was looking to renovate a 1950s church building in decline as a means of invigorating his congregation. The architect was looking for an uplifting, enlightened concept to create a sacred place, one that “was small enough for intimacy to remain, yet large enough for silence to echo.” What they produced together was indeed a miraculous transformation of spirit and place, one with positive, measurable outcomes for the congregation.

The goals for the renovation were to significantly improve the quality of illumination and to develop a form that would create a greater sense of closeness and reverie. The original church building, a typical 1954 A-frame structure, with a somber interior featuring tapered glulam columns of dark-stained wood.

Before the transformation, the nave was a traditionally axial and hierarchical form in which congregants gathered in a dark space apart from the pastor and choir. The new design brought forward and lowered the floor of the chancel and reorganized the pews in the round, creating a more embracing and participatory space. “Members and visitors alike have expressed the joy of the inclusive setting,” according to Marilyn and Don Fetherolf, corporate secretary and finance officer of the church, respectively.

The entire ceiling was transformed into a sculptural volume, formed by offsetting two irregular, curved planes lit by a combination of natural and man-made light. The design team drew inspiration for these facing forms, which shelter the sanctuary, from early Christian depictions of the mother of Christ with her cupping hands. The two planes also hide the sources of light, which seem to pool in pockets, feathering out from the sides of the space. The coloration of the light is subtly different on each face, warmer on the south face than on the north. The effect of the natural light changes over time and is both fragile and powerful.

Light has long been used to shape religious spaces. Light filters through stained glass in medieval cathedrals and through controlled openings in small chapels such as Notre Dame du Haut in Ronchamps, France. According to Kenneth Chang, chair of the building committee, “the darkness [in the Encino church] was lifted with light from skylights filtering through canopies of cloud panels.” The exceptional use of light, form, and symbol creates an architecture that inspires worshipers.

The architect of the First Presbyterian renovation considered the use of light a key design element. “The dynamic and transformative character of natural light heightens the sense of the ecstatic, of being brought into the revelation of divine grace and religious wisdom. Light is shaped in three movements that take the worshiper along a procession. The first movement is at the narthex, the entrance to the house of God, which filters in from above; its source is not evident. There is a suggestion of a space beyond, yet the main sanctuary is seen only through glimpses. The second movement corresponds to the main worship space. The congregation is illuminated by large openings to the north, which fill the sanctuary with tender light representative of God’s love and charity. Sources from the south are low, creating a common horizon of more brilliant light illuminating the congregation, the community of man. The third movement is the most brilliant and the most varied. Only here does light flow directly down the curved surfaces that shape the sanctuary, finally illuminating the full form of the church.” 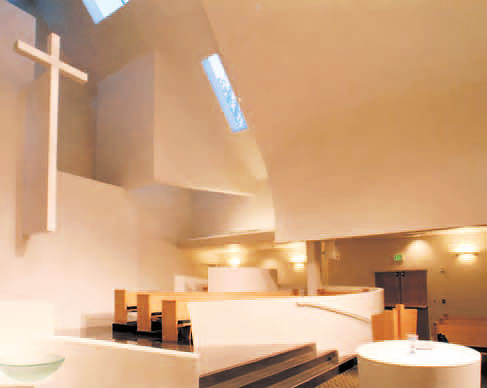 Fourteen skylights, some hidden, along with incandescent theater fixtures in sheltered pockets and fluorescent cove lighting, strategically control the illumination. This configuration creates a symphony of light that is varied and continually changing. The effect leads the eye to the back of the chancel where an elongated cross rises above the altar.

The congregation hoped the renovation would help increase membership, particularly among young adults. This goal was accomplished in several ways. The design uses a white-on-white color palette that provides a contemporary backdrop for weddings. The church is open for weddings to both members of the congregation and to non-members. The latter group generated new members who returned for Sunday services because they liked the atmosphere of the church.

An increase in the attendance at weekly services is also the result of the intense spiritual nature of the space after the renovation. When people are in the sanctuary, their spirits are lifted; that alone keeps them coming back. Pastor Malcolm Laing states, “There has been a very noticeable return of visitors who are looking for a new congregation to join, resulting in a 20 percent increase in membership.”

It is the religious experience that elevates the architecture of the renovated building and differentiates it from its previous form. According to Pastor Laing, “The remodeling of our sanctuary accomplished exactly what we had asked … a space that was light, uplifting, and welcoming … a space that physically manifested worship as a celebration in which all participate with the Eucharist, Baptism, and the Cross as the central focus … a space that felt holy. As people now enter our sanctuary for the very first time, their mouths fall open in awe-struck appreciation. And, more importantly, they return again and again. The design, seating, acoustics, and multimedia capability have provided our worship with renewed enthusiasm, greater energy, and stronger unity—pastors and people feel part of all that is taking place with all their senses engaged in creative ways … the sanctuary says, ‘This is the Community of New Possibilities where awesome worship is an every-Sunday experience.’”